skip to main | skip to sidebar

Well, first of all, I'm still pregnant. Yay! I will be 34 weeks on Saturday. My blood pressure hasn't been great but we are hoping to hold on until Dec 6. That would put me at 35 weeks and is also the day my Dr scheduled my c section. I hope Miss Hadlee is ready by then but we are so grateful to have made it this far that any time is a real blessing.

We also found out Syd needed to have her tonsils out. Fortunately they were able to schedule her quickly and the operation was done last Thursday the 18th. They were wonderful there and even went out the night before to buy Fresca for her to drink after because it has 0 carbs. :) She came through the procedure with flying colors. Her tonsils were twice as large as they originally thought and her adenoids were blocking 70% of her airway. So it was a good thing they came out.

The hard part about something like this is the diabetes. It makes everything more complicated and has proven that with a relatively simple procedure like this. Besides high numbers and some ketones at first, she was doing well until the ear pain started. Ear pain after a tonsil surgery is normal but Syd wasn't drinking enough. She was spilling super large ketones...it is a strip you pee on. It turned bright purple as soon as it was "used." When you are dehydrated this can happen but is especially dangerous for a diabetic because it can cause DKA or diabetic ketoacidosis. We have been fighting these ketones for about 24 hours now with no relief. She is still struggling drinking.

Her pediatrician recommended we go to the ER for some IV fluids. Syd was a champ. Her blood work showed some mild DKA but wasn't real bad yet...thank goodness. After giving her some fluids they gave us 2 options. 1) we could try to continue fighting this at home now that she was more hydrated and try to keep her drinking or 2) we could be admitted and stay there. Well I picked to go home because that is just easier all around. They kept her IV in though in case we need to bring her back in tonight, they won't need to re poke her. So, now we are home. Syd is in bed. We are still struggling with the fluids but she is really trying. She doesn't refuse them, she just cries and can't drink much because her ears hurt. The pain meds help some but not as much as you would think they should. Hopefully we can get these ketones down...as of about half an hour ago they hadn't budged. So, that is our update. Now, here are some pictures.

~All cute in her cap before her surgery. 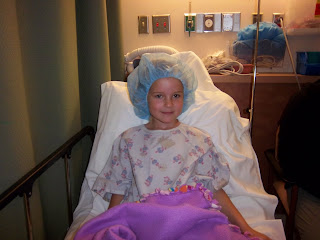 ~In recovery with me after surgery. I am reading her The Enormous Egg. 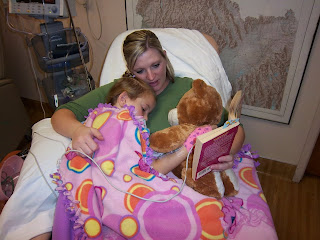 ~Syd and I have taken many a naps together since the surgery. Apparently Loren got camera happy. :) 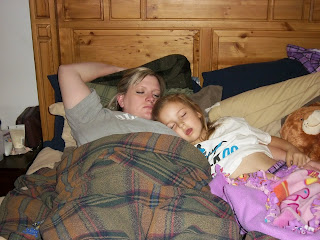 ~Daddy bought her a little tv tray to eat and color on. 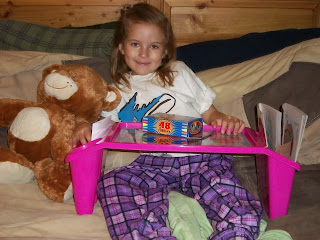 ~Tonight after our ER trip. she still has her IV hooked in her hand. She just looks crummy. I hope she feels better soon and we don't have to take her back in. 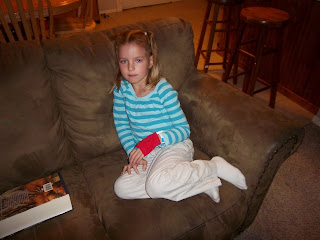 ~Ready for bed and tucked in. We propped her up, hoping it will help the ear pain. 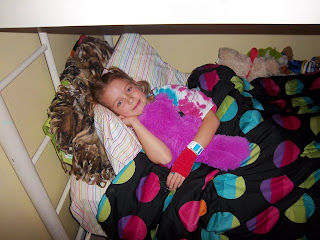 Well, that's our update! I hope you all are doing well and have a happy and safe Thanksgiving!

Oh and I heard a great quote the other day, "You don't know how strong you are until strong is all you have left."
Posted by Shamae (Ghost written by Loren her hubby) at 10:06 PM

Great job on managing everything...you guys are amazing!! I hope that cute lil munchkin can get some relief and is able maintain the liquid intake. Good luck with the upcoming wks and WOOHOO for almost 34wks and possibly 35wks Great stuff!!!

Shamae you are amazing and strong and you are handling everything so well!!! I am sorry about Miss Sydney having to go through all this and I hope better days are ahead!!

Way to go keeping that cute new baby in. Aidan was a 35 weeker and did great...the girls were too because like you I wanted to keep them in a LONG time!!!! Have a terrific Thanksgiving!!!

We had ketones last week that wouldnt go away for anything it was crazy. Im sending you lots of love and hopes for no more ER visits!! Lots of Love!

I was JUST thinking about you. I am so glad you gave us an update.
I am sorry to hear about syd, but she has an awsome mom and dad to kick some ketone boo-tey!!

I hope you had a nice Thanksgiving. Take care of yourself... Dec 6th is RIGHT around the corner!!!

Thank you for the update! YAY - you are still pregnant!! Baby Hadlee will be here before you know it!!

I'm so sorry about Syd -- I hope she is feeling better and the ketones are gone! Stupid Diabetes!!

Thinking about you and Syd! DNQ

So proud of you, my friend.

Hadlee is almost her.

I hope Syd is feeling better...and I hope you're ready for what's to come!

Happy thanksgiving! Sydney is a trooper. We were lucky when Ian had his tonsils out because a nurse named Jessica worked there! Glad you are hanging in there.

Yeah, the nurses at RMOS are awesome! I'm not surprised they went out and bought Fresca for Syd. :) So sorry to hear the recovery part is going a little slow (and painful).

Hope she feels better soon! She is such a cutie pie. :)

She is such a trooper. So glad that she is on the mend.

I'm late to the party but so grateful for the update! I need another one...I'm heading over to FB to bother you! ((HUGS)) She looks so miserable in that picture! I hope she is happy and smiley again!

And good job keeping that sweet little girl in! Every day a victory!

Hey! Dec 6th is my due date!!! I'm hoping any day now! Maybe we will have baby girls on the same day!

I hope Syd is feeling better!

Shamae (Ghost written by Loren her hubby)
I'm the proud mother to three very sweet little girls. Morgan is 6 and Sydney is 8. Our latest sweet, little Hadlee is 1 1/2. Sydney has had Type 1 Diabetes since Feb. 2008. Much of my blogging deals with my musings as I attempt to parent a child with Type 1. I also use my blog to share our laughs and tears and to commiserate with my friends and family. This profile wouldn't be complete unless I mentioned that I'm married to a wonderful, amazing, sensitive, good-looking man and I am so happy to share my life with him. We have been married for 9 years. He is my best friend and I can't imagine riding this journey with anyone else! If you happened to have stumbled on this blog and have any questions, feel free to ask. There are also some links further down my page that answers some of the most FAQ about Type 1 Diabetes.

My husband and I 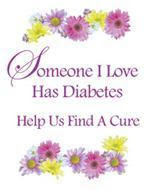